Counting the Cost of Crime in Retail | Retail Security

Counting the Cost of Crime in Retail

115 employees are attacked in their place of work every single day here in UK and according to the British Retail Consortium. these retail crime incidents are becoming more severe, with weapons, particularly knives, posing a more significant threat to retail staff than ever before.

These are, by no means, victimless crimes. They impact on the individuals who make the retail industry such a vibrant place to work; their families and loved ones; the communities to which they contribute so much; and those who rely on the public services that the retail sector indirectly supports.

The total cost of crime has again increased – to around £900 million. Together with the £1billion spent on retail crime prevention such as store detectives and retail security officers, crime now accounts for around £1.9 billion in losses to the retail industry. At a time when it is undergoing a dramatic reinvention, with technology changing the way we shop, businesses can ill-afford to be burdened by these huge crime-related costs!

This year’s key findings from the BRC are:

A report in the Telegraph shows that shoplifting offences are on the rise following the introduction a £200 threshold before criminals are pursued. Figures obtained from 25 police forces across England and Wales suggest there’s been at least a 7% increase in the number of offences reported by supermarkets over the past four years. 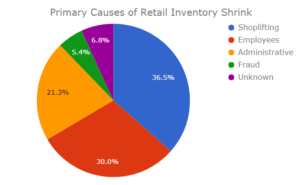 The £200 threshold was introduced as part of the Anti-Social Behaviour, Crime and Policing Act 2014 and means anyone accused of “low value shoplifting” no longer has to attend court and can plead guilty by post in the same way as a speeding motorist.

Organised gangs of shoplifters are thought to be exploiting the system by travelling around the country and hitting multiple stores, while always remaining careful to stay under the £200 threshold. But the cost to the businesses is often passed onto shoppers in the form of rising prices.

The rise in the number of stores offering self-scanning is adding to this growing trend. Given we’re in the middle of the Covid-19 pandemic, and human contact is being restricted, many stores are focussing on the use of self-scanners to protect shoppers and workers from coming into direct contact. However, the growing use of self-scanning has been associated with some increase in theft by customers, because there is no one to look over them. Retailers that have installed self-scanning are examining ways they can minimise losses by theft or customer error when using this equipment.

In the year ending March 2019, police recorded 374,395 shoplifting cases (Home Office, 2019), but the actual number of shoplifting cases is likely to be 15-21 times higher because many cases go unreported, especially by smaller stores who simply can’t afford the additional cost of retail security officers or store detectives. 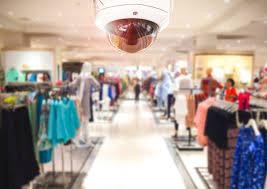 Organised Retail Crime (ORC) consists of gangs or groups of criminals stealing merchandise, data or cash from retailers and isn’t just one single type of theft. This might involve theft from consignments, delivery vehicles or warehouses. It can involve large-scale organised shoplifting and refund fraud using a network of small-time thieves, some of whom may well have been trafficked by the same gang. Gangs may also use violence to ensure compliance by shop staff.

The Centre for Retail Research estimates that 28.2% of losses from external crime was caused by ORC, a total of £562mn.

It’s difficult to estimate the true level of staff theft as it can be hard to detect. Some of it often involves collusion between a member of staff and customers, such as a relative or a friend, although there is evidence that some apparent collusion is the result of intimidation. Staff can mis-scan items, give too much change, or place merchandise in the wrong part of the store which they then steal. Goods in perfect condition can be left outside near the waste bins for later collection, or fake refunds can be given on goods that are never returned.

It’s thought that retail staff theft results in around £1,305mn a year. 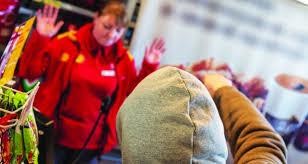 “I’ve worked in retail businesses for more than 20 years and I’ve never seen such high levels of violence and abuse, often involving a weapon, directed towards shop workers. In just the first 90 days of 2019, at the Co-op we saw more than 2,500 incidents of which 650 involved violence. One in every four of those incidents involved a weapon. I know that other shop workers in other retail businesses face the same level of violence and abuse. This is an issue for us all and reflects the issues in society. We are a Community retailer at the heart of High Streets.”

A report by City, University of London, shows that shop workers are experiencing “severe mental health consequences” as a result of violent store crime, including long-lasting anxiety and post-traumatic stress disorder.

More than 42,000 assaults or threats were recorded in the retail industry in 2018 and the four main scenarios that lead to violent interactions are:

The report collated data from the Home Office, British Retail Consortium, Association of Convenience Stores and the Union of Shop, Distributive and Allied Workers.

HOW CAN WE HELP?

We understand that theft is a growing concern for retailers, which is why our Retail Security solutions are tailored to meet your business needs and to achieve the objective of reducing retail theft and shrinkage, whether that be employee theft or shoplifting.

We have a wealth of knowledge within the retail sector, providing uniformed Security Officers and plain clothed Store Detectives.

Both our Security Officers and Store Detectives are equipped to deal with not just theft but any security issue which may arise during the course of their duties. We work very closely with local police and authorities in order to establish the identities of known offenders on the retail crime scene.

If you would like to know more about how we can work with you to protect your retail staff and premises, you can contact us here: https://www.strongguardsecurity.co.uk/contact-us/